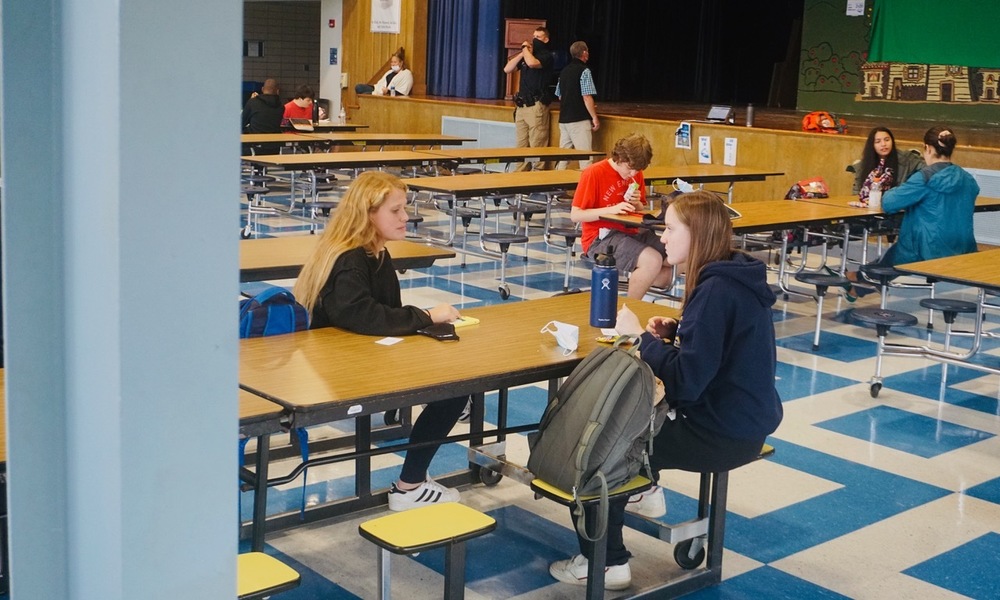 MIDDLETOWN, R.I. (OCTOBER 20, 2020) – When COVID-19 struck in late March, the world
changed for everyone, including those who work and study at Middletown High.
Classes were pushed online, sports were cancelled and a lot of the “extras” like clubs and
after school activities were shelved.
Now, as students return to the Valley Road school for classes on at least a part-time basis, a
sense of normalcy is coming back as well.
This morning, Principal Jeffrey Heath announced the school was bringing back
extracurricular clubs, albeit the virtual online kind until COVID-19 clears up a bit more.
“Everyone is doing a great job here and really adjusted well,” Heath said. “When it comes
down to it, high school is supposed to be fun and that’s what we’re trying to achieve, a
sense of fun, some true student engagement outside the classroom.”
In an average year, Middletown High hosts about 30 clubs and extracurriculars. Those
range from the Yearbook Club to The Wave student newspaper, the Math Team, Mock Trial,
Drama and Robotics, among others.
Because of social distancing and gathering limits, it makes it hard for any to meet on a
regular basis, although the Middletown High Student Council has continued its work.
During first period lunch, seniors Andrew Bolano, Pierce Clare and twin brothers Patrick
and Ryan Andrade sat at a couple of tables at the back of the lunchroom as cool air blew in
through several open windows.
The friends agreed the return to school since September is much better than they expected
and they welcomed clubs – and anything else that made school feel like school again.
Andrew said the Student Council has been meeting all along, focusing on planning and
fundraising for events like prom, which are planned, but might be a little different for the
Class of 2021.
“When we talk, we’re all spread out and at a good distance from each other,” Andrew said.
“It’s a little more difficult to raise money because we can’t have all the normal activities
because of COVID, but we’re going to figure it out.”
“I like that they’re bringing back clubs,” Ryan said. “I mainly do sports, but I think being in
school, everyone is doing the best they can considering the circumstances. It’s important.”
Nearby, juniors Katherine Ceglarski and Lily Jankuska said school has been going well, all
things considered.
“It’s definitely different, an adjustment,” Katherine said. “I agree with them having clubs. It
will help it feel a little more normal.”
“I don’t think it’s nearly as bad as I thought it was going to be,” Lily added.
Fellow junior Shomari Gilmore was still learning the ropes at Middletown High as a new
student from Jamaica this year. A big fan of biology class, Shomari said everyone has been
welcoming.
“If there was a biology club, I’d sign up,” Shomari said. “School has been fine. Everyone is
doing what they’re supposed to.”
Seniors Sydnee Head and Emily Cassidy said they were focused on successfully finishing
out this school year – and what the future might hold after they leave Middletown High.
Sydnee said she worked as a photographer for The Wave for a bit on the recommendation
of her grandparents. While she enjoyed shooting photos for the school newspaper, Sydnee
said she couldn’t imagine pursuing news photography for a career. Still, she said it was cool
to have the opportunity, something that wouldn’t have been possible without the club.
“The more we’re able to do together, in person, the more it will feel like a normal school
year,” Sydnee said.
“It’s difficult to do right now because of everything that’s going on, but it’s good they’re
looking at having the clubs,” Emily added. “It helps us be social and see one another more.”