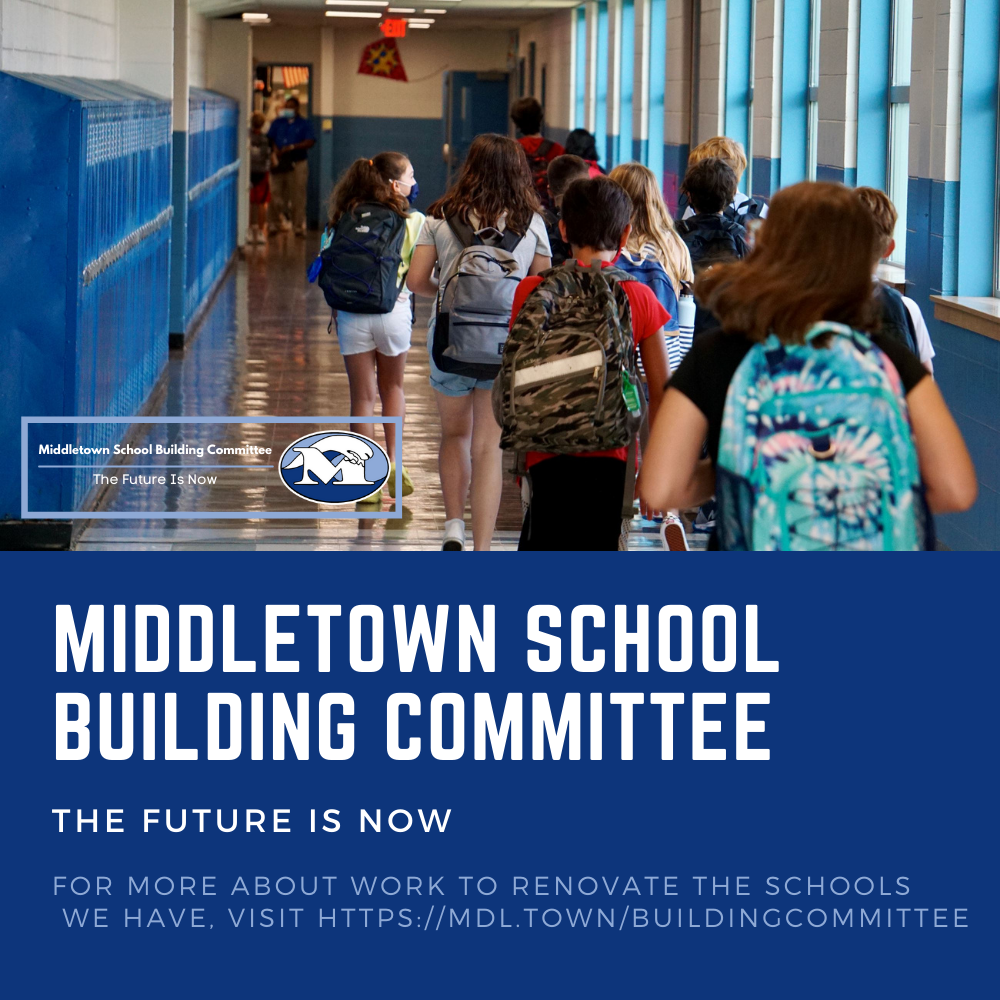 While most of the work would focus on behind-the-scenes infrastructure improvements to extend the useful life of the buildings for decades, each of the schools would see sweeping upgrades to bring them into 21st century.

This included state-of-the-art technology and science labs at Middletown High, a multipurpose lecture hall and learning commons at Gaudet Middle School as well as new gymnasium and media centers at Aquidneck and Forest Avenue elementary schools, among other work. The School Department administrative offices would also be moved to new space on the Gaudet Middle School campus.

An extensive recommended work list featuring about 300 significant improvements was rolled out for the first time publicly Wednesday night during a Building Committee meeting from the Oliphant administration building, which would be shuttered as part of the plan.

The other options ranged from $96 million for health and safety work only to $178 million for wholesale upgrades across the district.

Before any proposal goes before voters likely in November 2022, it must get the go ahead from the Town Council. As of Wednesday, Town Clerk officials said the item had not been slated for discussion on a future council docket — yet.

“The list of things to be done have to be done,” said Ed Brady, School Building Committee Co-Chairman. “It’s not like these problems are going to go away…’Pay-as-you-go’ isn’t going to be the way to do this. We couldn’t even afford how much money we’d need to put into the budget every year to do this. It would be like doing a home improvement and going to the bank and instead of getting your mortgage refinanced, you’re going in with your credit card.”

Going back 15 years, the future of the school buildings and grounds has been the subject of a running conversation in the community.

Although the buildings are all at least 50 plus years old, school officials have said regular maintenance and upkeep have kept them in good shape on the surface. However, upon closer look, they’ve said the schools are starting to show their age, particularly the systems that act as the guts of each building. This includes everything from roof, window and waterproofing work to the outside of the schools to handicapped access, sprinklers, plumbing, mechanical, electrical and security improvements.

Despite the price tag for Option “D,” school leaders have said it was far less expensive than building each school new. For decades, the Town has taken a “fix what we have” strategy, where the four school structures are repaired and upgraded. They’ve said that course tends to be less disruptive to learning and far less expensive.

Voters have overwhelmingly supported this course. Most recently, they okayed a $10 million school safety and improvement bond for work to each of the schools.

In this round, DBVW was brought in from the beginning to assist with the process. The schools have also had the volunteer Building Committee take the lead more than ever before.

To get a look at where that money went and where things are headed, the council took a Saturday tour of each of the schools last month. There, council members were shown by DBVW officials the problems that most probably wouldn’t see.

They said none were serious enough to warrant closing any of the school buildings, but if they continued unaddressed, they would cause costlier problems down the line. For a complete view of the issues identified by DBVW and recommended fixes, visit https://mdl.town/PreliminarySchoolPlan online.

To see all the conceptual work included in Option “D,” go to https://www.middletownri.com/DocumentCenter/View/3319/121521-School-Building-Committee-Option-D online. For more about the Building Committee itself, check out https://mdl.town/BuildingCommittee online.

“I think we need to present to the Town Council every one of those options and let them see the true costs of getting our schools to the 21st century learning, all the improvements,” Building Committee Co-Chairman Charlie Roberts said.

“If you think about that $123 million from around 15 years ago, this seems like a bargain,” School Committeewoman Tami Holden said. “This would be tremendous and all this work is definitely necessary.”

Superintendent Rosemarie K. Kraeger said it was clear there was much work ahead, but all the suggestions were important for the schools — and the community.

“This is about more than just a building project,” Kraeger said. “This is about our entire community rallying around what’s right, not only for education but extend the useful life of our schools for decades and help move Middletown to the next level educationally.”